I really liked the way my pieces for Garter Belts and Gasoline at the Alternative Cafe in Seaside, CA turned out.
Here they are if you haven't seen them. 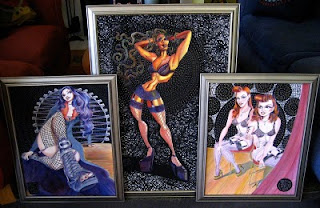 I also did my first acrylic since high school. Which was for a banner to raise funds for the Bothwell Center an art center in Livermore, CA where I grew up. 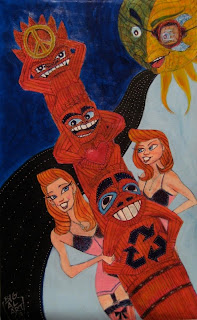 P is for Pumpkins! 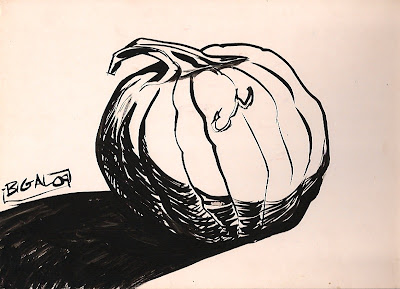 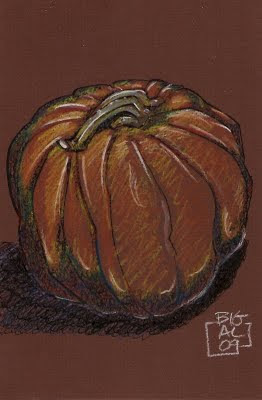 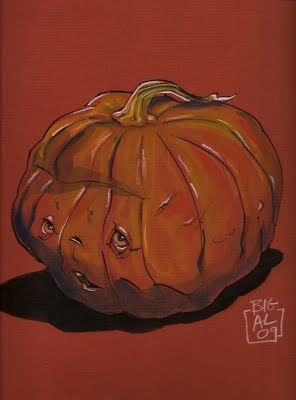 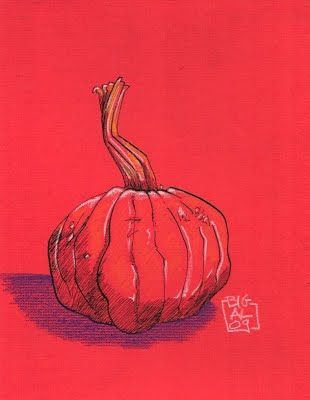 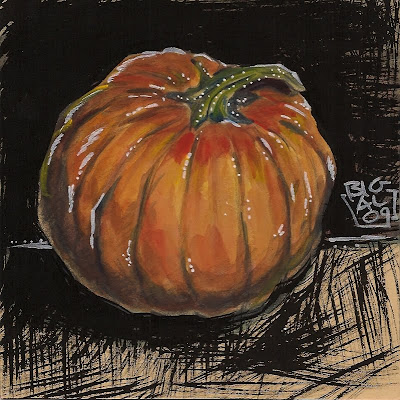 Last night and early into this morning I had an extended modeling session with one of my favorite fall subjects.
Posted by Big AL at 3:56 PM No comments:

If it's October that means Pumpkins! and birthdays. 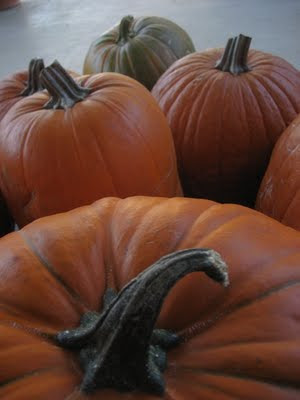 My brother, father and myself have birthdays in October. The 3rd, 5th and 9th respectively.
Posted by Big AL at 11:55 PM No comments: 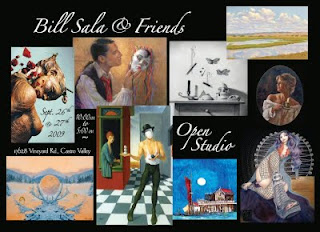 I'll be doing caricatures and showing some of my newest art.

I painted this in August. It's my first acrylic since high school. 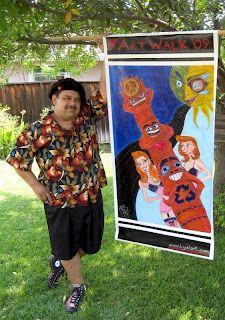 There was a theme the artist's could follow if they chose: Peace, Love & Recycle.

I incorporated the "Peace, Love & Recycle" by recycling themes I've used over the years (tikis, pinups, and objects - Livermore's Centennial Park Totem Pole which I drew back in high school).
I used reference of Bettina May and go-go Amy of the Pretty Things Peepshow for the lovelies hanging about the tiki.
The tiki was inspired by the totem pole at Centennial Park located on the North East corner of 4th and Holmes. It is so named because the Centennial Time Capsule was buried there in 1969. Later the time capsule could not be located, even by sophisticated metal detection equipment. It turned out that it was located under the totem pole.

My banner is hanging at 2nd Street between J and K Streets near Tommie's Deli in Livermore, CA 94550. There are banners on 1st Street, 2nd Street and North Livermore Avenue. Many artists created banners. They will be auctioned off as a fundraiser for the Bothwell Arts Center on October 10: 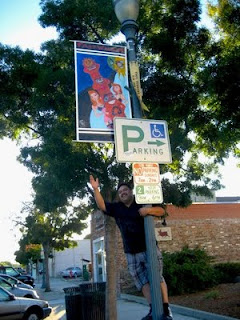 Here's the business side of the banner. 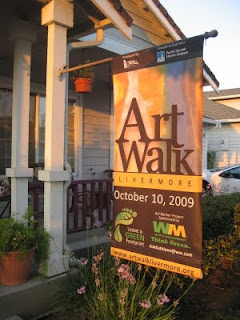 Please come out to Livermore on October 10th and support the Arts and Artists who are in and around the area.
Posted by Big AL at 11:56 AM No comments:

September 26th is going to be a busy day for Big AL. I'll be in Castro Valley for an Open Studio event during the day and at Hell's Belles 4th Annual Pinewood Derby and Silent Art Auction in the evening. 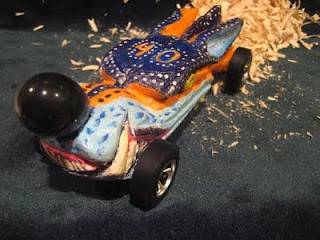 One side of the car has a toothy grin and the other a classic tongue wag. 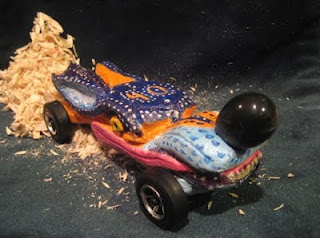 I also donated my "Xmas Bettie" for the silent art auction. 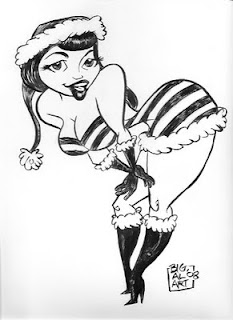 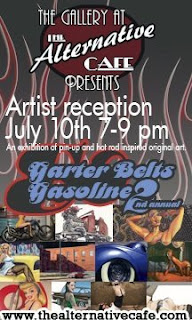 Garter Belts and Gasoline 2 was curated by Tanem.

More info at The Alternative Cafe.
Posted by Big AL at 8:36 AM No comments:

I'll have to write more about it later, but here's Susannah and myself with the final image. 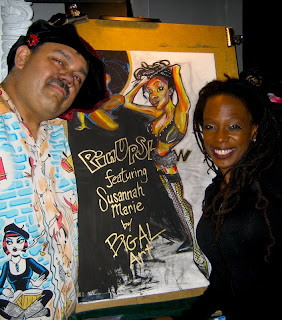 What will happen when Big Al gets together to draw and paint Fine Art and Photography Figure Model Susannah Marie a.k.a. THE NAKED MUSE live at Double Dutch on May 5th? (P.S. Susannah will not be nude at the Double Dutch much to her dismay.) She said she'd don some fishnets for some of the poses!

The piece created WILL go home with one of the nights attendees through a raffle (need not be present at time of ticket drawing ... come early and check it out).

Here's a watercolor and some revised sketches of Big AL's from the last time they crossed paths. 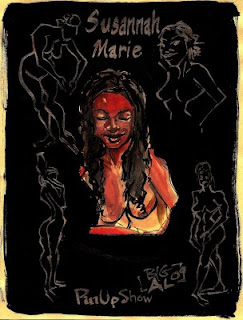 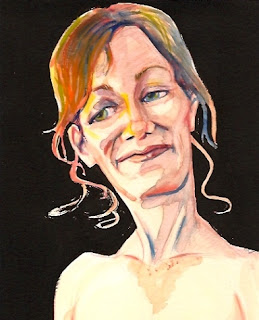 The patrons pay 5 bucks a ticket for a chance to win the creation of the evening.

Come out and support art & the artists that create it!

I'll be the featured artist on Tuesday, May 5th. I'll be drawing Fine Art and Photography Figure Model Susannah Marie. 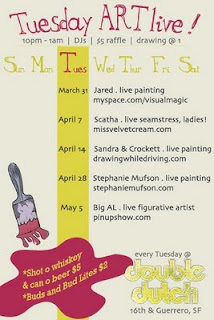 This image is based on burlesque star and PinUp, Dita VonTeese 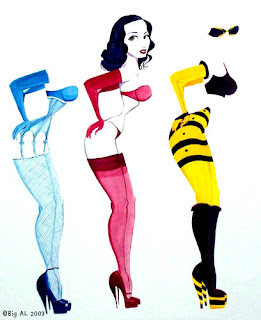 This image is based on PinUp and Glitteress, Asia DeVinyl 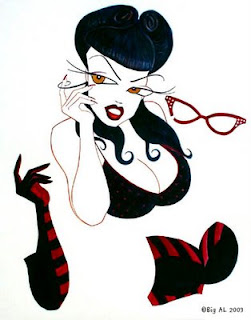 A couple of Ferocious Fantastic Foamcore Femmes from 2003. 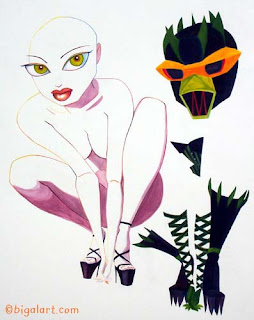 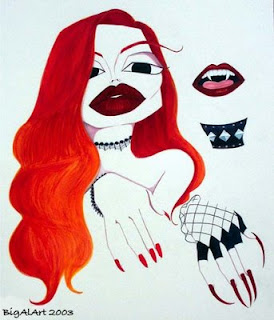 These are 32x40" watercolor on foamcore
Posted by Big AL at 6:01 PM No comments:

Live from an event in Livermore, CA 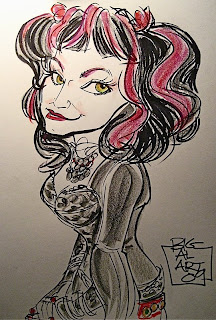